1:  being in a state of dying : approaching death

This year's St. Patrick's Day in Savannah was beautiful, warm and sunny, but not humid.

It's not so every year. Some years it is rainy and cold and every one is sort of gritting their teeth and the people marching in the parade look wet and miserable.
A cold rain also makes all the drunks mean.

But that was not the case this year. Everyone was happy that I could see, drunk or no.

Savannah has a very old (1824) and large parade and celebration. Some say up to 400,000 attend, I think the number is probably closer to 250,000, but that is plenty large considering the city's population is about 140,000. The city pretty much shuts down (a lot of companies give the day off) and many streets are closed to traffic and packed with people.

I have been going to the parade on and off for more than 25 years now, and in the last 10 years or so, the city and various merchant associations, along with the police, have made an effort to control the mayhem. The drinking and crazy behavior were totally out of hand, and people were staying away because of the possibility of getting barfed on or caught up in some kind of fight or other unpleasantness. I have to say that the police seem to thread the needle pretty good between letting people run wild and being too heavy handed in enforcing the law. There's still plenty of drinking and partying in the street, but you're not afraid to bring the kids downtown.
This year I saw an article that says there were only about 190 arrests for the whole week. That's pretty good, considering the amount of people and liquor involved.


The parade starts in the morning and is about 3 hours long. People camp out along the route to keep good seats for themselves and their friends, but the secret is to have a friend with a house downtown on the parade route. We've been pretty lucky in this regard and this year we able to hang out at friends' house with a large set of steps everyone could hang out and watch from.


The girls all had fun watching the various bands and eating many cookies.

Various Pipe and Drum Corps and Bands were marching:

... and the Savannah area is home to a couple of military bases where the troops have gone to Iraq and Afghanistan, some multiple times, so there is always a large contingent from the army marching, and lots of enthusiastic cheering from the crowd.

So another St.Patrick's Day weekend has come and gone, so we'll pack up our dumb green t-shirts and other offensive Irish stereotype gear until next year.
Posted by jjdaddyo at 3/20/2011 07:50:00 PM No comments:

Email ThisBlogThis!Share to TwitterShare to FacebookShare to Pinterest
Labels: savannah

I was perusing the internet a few months ago (as one does) and I came across this video:

[Yes, she does look like a young Emma Watson. Look out! It's Hermione Granger with a machine gun!]

Now for folks from outside These United States or just uninterested in guns, the weapon being handled here is the civilian, semi-automatic version of the M-16. It can be purchased at pretty much any gun store or gun show for $800 - $2000, in many states, by anyone over age 18 with a drivers license and no criminal record. Yes, "Second Amendment" rhymes with "laissez faire".

Why teach your 11 year old kid to field strip an AR-15? Why not teach her CPR, or carpentry or even poker? (this particular girl may know all these things, but you get the idea) On the other hand, there are plenty of worse things you can get your young girl involved in.
Yes, kids can become fascinated by guns or indeed any esoteric subject- Doctor Who, dinosaurs, dolls, whatever. A lot of kids go through a phase where they love to play cards all day. However, as the father of 3 I know that a child will do most anything to please their parents, even clean their rooms once in while. And kids cannot (legally) learn this much about guns without their parent's blessing.
I am not anti-gun, I own guns and sooner or later I will teach my girls to fire them, if they want. (Since I own high-powered pistols, this will probably not be for a while, since you have to be fairly strong to handle them safely.) Plenty of kids learn to shoot guns younger than 11 but they are usually in a rural environment and usually a light rifle or shotgun for targets or hunting. This is not that kind of gun.

For me, this disturbing image of small girl and large gun she can barely handle brings to mind pictures of child soldiers in Asia and Africa, stoned on various substances, the very embodiment of insane brainwashing and nihilism. 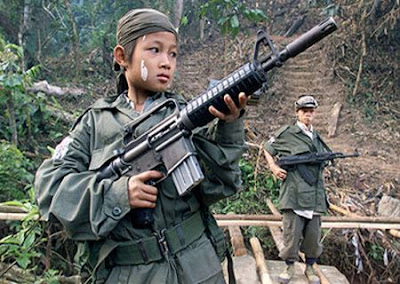 I bet those kids know how to field-strip their guns, too.

If I was going to teach my kids some semi-useful skills, I would teach them this:


Of course that means I would have to learn to scratch DJ first- maybe there's an after-school program in my neighborhood?
Posted by jjdaddyo at 2/04/2010 09:19:00 PM 6 comments: